Heck, I have no idea who is telling the truth but all I know is IT IS ALL ABOUT MONEY AND EGO.

I am posting the info before  THOSE PEOPLE delete their  blogs and I won’t be surprised they are put in Jail via the ISA.You be the judge.

Oh boy, this is going to make UMNO/BN looooooooooooks sooo good and sincere.

Liu said the blog http://t4tbh.blogspot.com had come up on Thursday with a tag line Truth for Teoh Beng Hock that had a list of 172 projects and events with details of allocations spend from February 28, 2008 before Pakatan Rakyat took over Selangor.

Documents containing 83 projects (item 89 to 172) in Sg Pelek constituency given to one Wong Chuan Chow. The constituency is under the purview of Ronnie Liu. 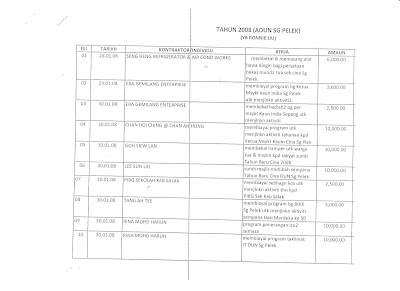 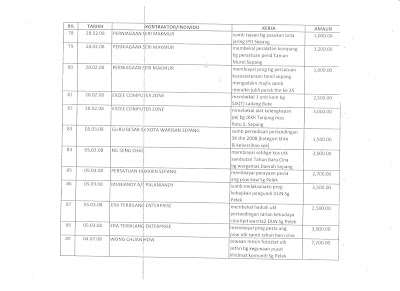 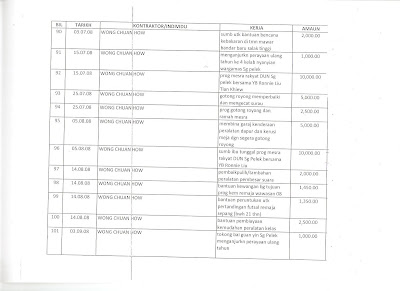 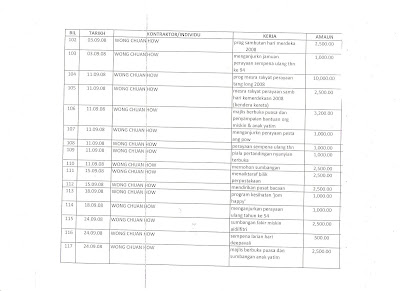 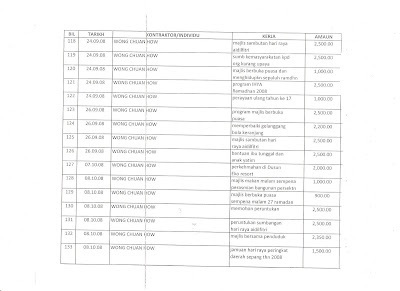 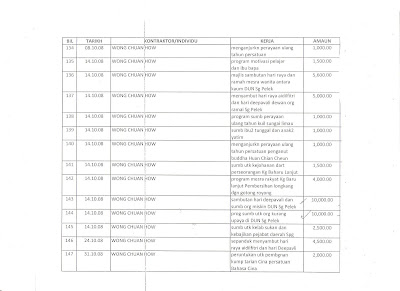 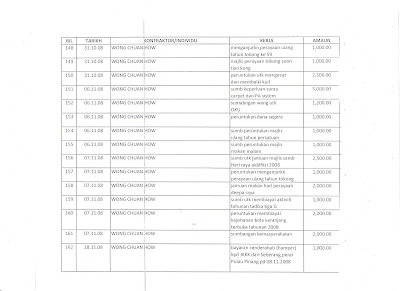 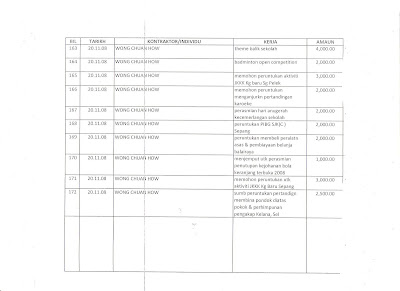 Teoh Beng Hock is dead. Let not his death be forgotten and for nothing. The reason why Teoh died is because of the massive scale of corruption by the DAP since they took over the running of the Selangor state government in March 2008.

For the first time we have documents evidence, names, cheque nos, vouchers and projects which the MACC, the Police, the Royal Commission of Inquiry, the Magistrate Court Inquest, the NGOs, the DAP itself and any member of the public can verify themselves.

This is actually not corruption. Corruption means you get money illegally from someone else. In the UMNO style, someone gets a project. Then they pay through a runner 10% or 20%, usually in cash inside a bag. Very simple and also quite smart.

But the DAP are quite stupid. They set up their own dummy companies, create fake invoice, fake projects and then take the money out. This is stealing, not corruption. But because they abuse their power it is also involving corruption. In the process they leave behind a very long trail of documents and evidence.

The late Teoh Beng Hock was involved in this scandal also but he was forced by Ean Yong and Ronnie Liu. He did not really like what was happening. To protect himself, Teoh made copies of all the false documents and dummy companies that was set up by the DAP. Teoh left behind a hard disk with someone which contains a stack of information detailing the corruption by the DAP in Selangor.

They followed a simple but silly method. Each Kawasan DUN (like Kajang, Teratai, Balakong) is given RM500,000 funds which the Pakatan ADUN can spend on projects. The DAP has been stealing this money – a little at a time. Few thousand ringgit at a time. But there are more than 300 small projects – Teoh gave us a long list.

The Selangor govt has said that they will tender every single project. This is their lying. In the list provided by Teoh, some people and some companies sapu many of the projects.

Among the biggest players are WONG CHUAN HOW (in the Kawasan DUN Sungai Pelek) under YB Ronnie Liu who was given 84 projects totalling over RM200,000 (Tarian Cina Persatuan Bahasa, Perayaan Persatuan Buddha Huan Chian Chuen, Kejohanan Bola Keranjang). Other names include Perniagaan Seri Makmur, Era Terbilang Enterprise, Era Gemilang Enterprise and many more. Teoh gave a full list. We have scanned some of the documents (from about 100 pages of documents)

How can one person get 84 different contracts?

The amounts are small but the method they use is very big. This is just in one year. Imagine if the DAP take over the federal govt? Here are some examples how DAP do it. The names and the projects are all real.

WSK Enterprise paid RM1,800 by Selangor state govt using rakyat money as the contractor / coordinator. The money is paid out as follows:

will be joining Sdr Kit Siang at a pc tomorrow on matters relating to the defamatory blog attacking Sdr Ean Yong Hian Wah and me and the Selangor DAP in general. Â Â In my pc today, I pointed out that Wong Chuan How is not a contractor as claimed; he is actually my special assistant who helps me to process the annual allocation for Sg Pelek state constituency.After having a closer look, I found that the blog contains nothing but bullshits.By the way, I have put up all details concerning the 2008 allocation for Sg Pelek, Sg Panjang and Pandamaran Â in this blog in Janauary this year ( under annual allocation category).Â